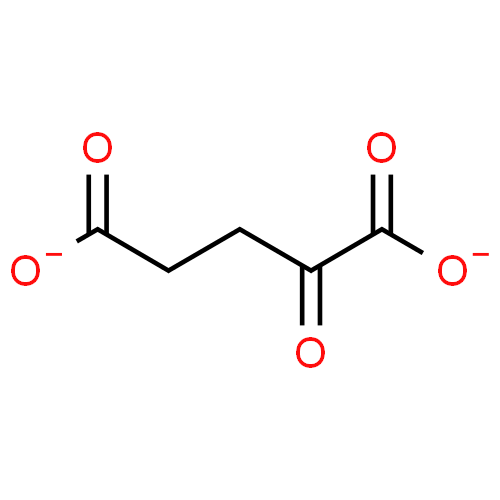 Alpha-ketoglutarate is a member of the chemical class known as Gamma Keto-Acids and Derivatives. These are organic compounds containing an aldehyde substituted with a keto group on the C4 carbon atom. Alpha-ketoglutarate is invovled in pentose and glucuronate interconversions, C5-Branched dibasic acid metabolism, Vitamin B6 metabolism, alanine, aspartate and glutamate metabolism, Butanoate metabolism, Glyoxylate and dicarboxylate metabolism, Carbon fixation pathways in prokaryotes, Lysine biosynthesis, Biosynthesis of terpenoids and steroids, and the Citrate cycle (TCA cycle). Alpha-Ketoglutaric acid is one of two ketone derivatives of glutaric acid. (The term ketoglutaric acid, when not further qualified, almost always refers to the alpha variant. Alpha-Ketoglutaric acid varies only by the position of the ketone functional group, and is much less common. Its anion, alpha-ketoglutarate (alpha-KG, also called oxo-glutarate) is an important biological compound. It is the keto acid produced by de-amination of glutamate, and is an intermediate in the Krebs cycle [ECMDB].