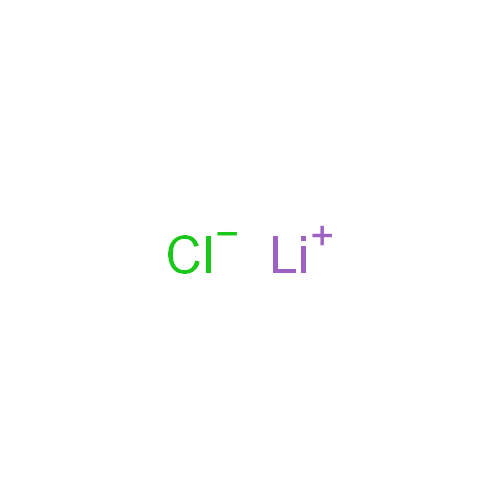 Lithium Chloride is an antiviral metal halide utilized in a variety of assays to study cell-fate and neurobiology. In developingXenopus embryos, lithium chloride is observed to exert inhibition of GSK-3β (glycogen synthase kinase-3β), yet not reported to be a general inhibitor of other protein kinases. These observations may have implications for lithium chloride on cell-fate determination in several organisms including Xenopus and Dictyostelium. Additionally, in transfected Chinese Hamster Ovary cells (CHO) stimulated with angiotension II (Ang II), it was noted that lithium chloride enhanced the production of inositol triphosphate. The antiviral properties of lithium chloride were noted in a study which showed that the compound inhibited pseudorabis virus infection in vitro. In Drosophila, it was observed that in the nervous system, lithium chloride may have an effect on amino acid metabolism. Futhermore, in glial primary cell cultures, lithium chloride has been noted to provide protection against glutamate excitotoxicity by potentially reducing NR1 mRNA, the major N-methyl-D-aspartate receptor (NMDAR) subunit in the cells.